The ability for users to add comments to any data, anywhere in the system, is one of the more powerful features of the agileBase platform, that lets people collaborate really easily without clogging up email inboxes.

We continuously improve the functionality and user interface of the comments system, so here’s a quick visual tutorial on how it works and how best to use it. 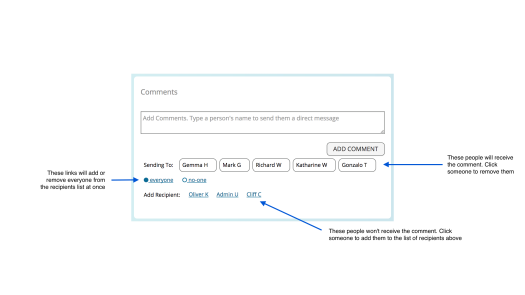 This is what a typical comments box looks like. The list of people to the right of ‘sending to’ are those that will see the added comment in the comments tile on their homepage when they log in. The list in ‘add recipient’ is those users who won’t see the comment.

Note: everyone will still be able to see the comment when they visit the record it’s logged against, it’s just that those not in the recipients list won’t get a notification of it in their comments tile.

Typically, everyone (with relevant privileges) will be selected by default. However, in some cases the software will select only certain users. For example, if you’re in a sales enquiry record that has an ‘owner’, only that salesperson may get comments by default.

If it’s really important that a particular user sees a certain comment, you can ‘up the priority’ by sending them a direct message. To do that, simply type include their first name when you’re typing the comment, with a capital first letter e.g.

If two people share the same first name, include their surname too, or the first letter of it.

We’re aware that two people can share the same forename and surname, we’re working on that!

What is a direct message? It means that when the user views their homepage, they’ll see the message at the top of the screen very prominently, with an option to reply. In future, it’s possible the system will send them an email too, or pop up a message on the screen wherever they are. Please let us know what you think about those ideas.

In fact, please let us know if you’ve any questions or suggestions about how to improve commenting. We look forward to talking to you.